Coming from a recent background of practical exhibition work, being back in the world of academia and participating in current debates has been stimulating and useful for me. But it leaves me concerned to produce critical material more appropriate to the black experience; material that I can use in my own work to help promote a more rigorous understanding of black visual studies. I find debates about post modern theory useful in approach, but lacking in the kind of cultural relevance and specificity that is needed now.

It is fortunate then, that in 2006, I was sponsored by the Society For The Humanities to take part  in the School of Criticism and Theory’s summer session exploring paradigms of race and theory in a seminar entitled Black Intellectuals. This was extremely satisfying providing me with the theoretical framework I am currently developing around the theme of Black Magic. In my previously published work, Negrophilia, (Thames and Hudson 2000), I explored the relationship between avant-garde white artists and black culture in Paris in the 1920s, devising a unique critical understanding of notions of the primitive in that era and suggesting new ways of reading those constructs. I am keen to bring the same innovative approach to my current research on Black Magic creating a useful platform for my new theoretical directions.

Black Magic: Representing Race from Ra to Rap is my most recent, and what I recognise will be, my long term research project. It is shaped around a traditional text/publication, but it is also being developed in other formats such as a digital archive and  a web log. Black Magic is the collective title for a series of narratives about race that survey the relationship between white and black culture; their shared superstitions and imagery. Following on from my work on Ethiopia in 2006, my interests are turning back to the Caribbean and Rastafari. RASTA! the exhibition and publication explores the visual language of Rastafari and the sacred signs of its biblical origins. Symbols such as the Star of David, the Lilly of the Valley, the Lion of the Tribe of Judah, the Stem of Jesse, and stories about the lost Ark of the Covenant are juxtaposed alongside Rastafari's strident anti-establishment imagery that make statements against racial and political oppression. RASTA! draws on a range of sources including Ethiopian and Byzantine art, African art, Hindu Spiritualism, street art, fashion and L.P. album covers. Viewers gain a visceral understanding of this mystical modern paradox, at once a vehicle for racial resistance and a belief system advocating universal equality.

In addition to the Black Magic and as a corollary to my work as a practicing  artist, I am also working on a more personal series of texts with the working title Diaspora Monologues.This collection of essays  (four of which have been published previously, explores art and history from a personal perspective (see: 'Pages from My Diary’ Patricia Mohammed (ed.) Gendered Realities: Essays in Caribbean Feminist Thought, UWI Press, Mona, 2002; 'Paradise, Primitivism and Parody', in Okwui Enwezor~Carlos Basualdo~Ute M. Bauer, Creolite and Creolization, Documenta 11- Platform 3, Kassel, 2002 'Birmingham+Babylon: Rainbow Dreams Back to Back' in Back to Black, 2005, and 'Diaspora Families in Black and White' Jamaica Journal, 2006). These essays form an on-going narrative about my life while exploring the photographic images, and art production, personal and public, that has accompanied it. Together, they consider what it means to be part of a black/global diaspora and the ways in which my own artistic agency and performativity has been used as a strategy for survival. The professional risk involved in creating and publishing work of this nature has been significant but the success of this approach also suggests new directions for my work as an art historian, pushing towards what Stuart Hall considers ' dreamwork'  that '...for those who work in the displaced zone of 'the cultural', .....has to somehow become a text, and image before it can be read' (Hall, 'Black Diaspora Artists in Britain', History Workshop Journal, Issue 61, 2005). 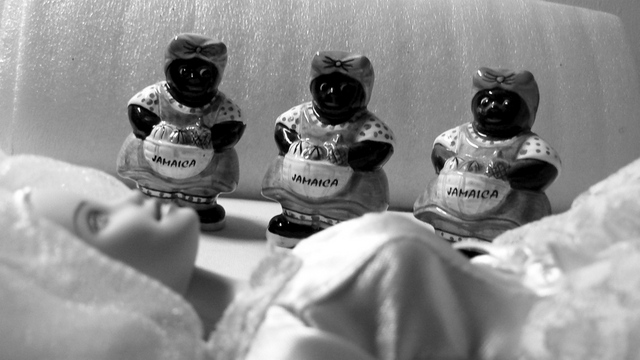