Filmmakers Zulema Griffin and Sherie L. Weldon directors of Deux Conceptualist Noir recently visited Kingston as part of their new project Ink Bleach a film that highlights issues related to race, black fashion and history. Their stark minimal styling using simple African influenced fabrics as backdrops requires that interviewees (who are in the main women) speak directly to the camera about subjects such as the sexualised black body, the politics of black hair and exploitation of black fashion throughout history. But these are not stream of consciousness conversations, rather, they are intimate monologues that are pointedly constructed and tightly edited to provide a contemporary understanding of female blackness from past to present. The film's narratives are compelling especially since they tell us something we as black women have always known but have rarely discussed. Ink Bleach is an ambitious project that might just succeed in its goal of being screened at the next Sundance Festival especially because the directors have been prepared to do the leg work traveling through the African diaspora talking to women who have been dealing with these issues whether as models, academics or victims of fashion. But even without mainstream acclaim by using digital technology and the internet, Deux Conceptualiste Noir have already opened up a space for talking about race and reconceptualising blackness. To view clips and more about the film, click here Ink Bleach. 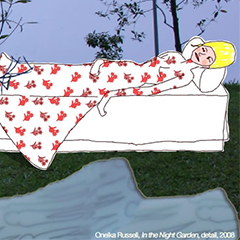