Born in 1913, Abrahams like so many schoolboys took up caricaturing his schoolmasters while in his teens at Calabar College. Similarly, he applied his skills to drawing automobiles (the rage of that era) and emulated his father who also created car designs. It was a schoolboy talent that he was reluctant to outgrow and encouraged by his headmaster Rev. Ernest Price he began copying old master paintings as well as documenting local Jamaican scenes. In addition, he became fascinated with spiritual and mythical topics and tried to depict the scenes he visualized from his reading of the Bible and Greek classics. These are the themes that he would return to repeatedly during his long career as an artist.

Abrahams has often proclaimed himself ‘the father of Jamaican art’, insisting that he was the first Jamaican born artist working independently to document Jamaica’s environs in the 1930’s and there is some evidence to support his boasts. As early as 1937, the British artist Augustus John, on a brief trip to Jamaica, reported that Carl Abrahams had a talent that should be nurtured, and in 1938 following the publication of some of his watercolours in the West Indian Review, editor Esther Chapman wrote:

“The works on the following pages are works by Carl Abrahams, a young Jamaican. Mr Abrahams has been doing newspaper cartoons of some merit for several years, but was unaware that the drawings illustrated here were far more interesting to critics. So far, Jamaica has depended for her art upon such ‘imported’ artists as Edna Manley and Koren [der Harootian]. Mr Abrahams, apparently uninfluenced by either shows a striking originality and great promise in his works”

Today, Abrahams’ paintings are highly collectible and he won his popularity with Jamaican art lovers because of an engaging style that meets the viewer’s need for narrative representation, but with imagery that also appears modern. The combination of Abrahams’ simplified forms, dark outlines, bold and acidic colours easily distinguish his painting. It is stylized but not stylish. Sometimes combined with frames that are hand crafted and seductively ornate, his choice of subject matter, his sardonic wit, and his idiosyncratic style confirm that Abraham’s is a unique and significant Caribbean artist. 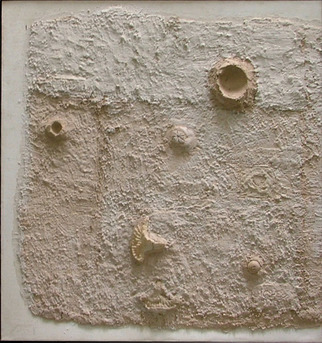