“The dismantling of apartheid in South Africa  was a breath of fresh air after so many bitter years of struggle by its people to rid themselvess of a brutal and bloody system that denied  them basic fundemental  rights of justice, equality and dignity.” As an artist and a humanist Rafiki Kariuki  says he is proud to have played his part in this struggle by producing works that provoked thoughts and  statements against the monstrous system of apartheid. In the heat of the struggle in the 1980s,  he produced several pieces such as War on Apartheid, Freedom Fighter, Crying in Soweto, Wounds of Apartheid and Flame  that spoke to the human condition, his primary interest in art.  Often Rafiki Kariuki’s  imagery depicts mankind as alienated, defeated, rejected, disillusioned  and  hampered,  but  there are also signs of  hope and  ways for mankind to  triumph and to participate in the real meaning of life. In 1991 he exhibited a body of  work entitled Vibes and Visions. In that exhibition he explored ideas about man, his environment and spirituality through paintings such as   Mystic Man, Man of Vision, Neighborhood, A Dry White Season, Supplication  and Meditation. He says. “My work poses many challenges in pursuit of  political ,theoretical  and spiritual concerns, and  generates a multiplicity  of forms and ideas that  harness my training and aesthetic awareness". PA-S 2000 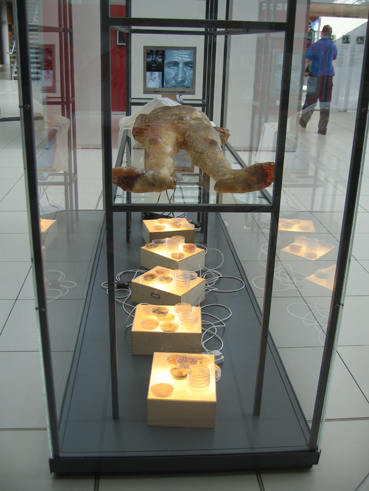