Excerpt from Lecture No. 6
Delivered by Petrine Archer-Straw - 5th March, 1986

In this month's lecture we focus on the painting "Revivalisists going to Heaven" created in 1986 by Jamaica's foremost intuitive and self-taught artist Malica Reynolds "Kapo" but in focussing on this masterpiece from the National Collection, let us also focus on ourselves and try to understand the role that we as viewers play in contributing to how a work is perceived and received and let us attempt to relinquish those preconceived notions and misconceptions which we all too casually rely on in our daily existence. let us objectively explore Kapo's world, the world of the artist and of the revivalist leader with its African rhythms and spiritual awakenings.

This work 'Revivalists going to Heaven' outstanding painting originally purchased by the American collector Larry Wirth lends itself beautifully to this type of extended discussions for embued in this work are the combined spiritual and artistic concepts of the dynamic 'Kapo' personality.

Born in Bynloss St. Catherine in 1911, Kapo received his first calling at age 12, when through a dream, Christ revealed himself. This was to initiate a period of intense spiritual activity when Kapo would be visited nightly through dreams, by members of the spiritual realm. By age 16 his life was given over to the Christian Revivalist cause and he began touring throughout the country side with the small revival bands characteristic of the day. But it was Kapo's preaching purse which was to make him a controversial figure, but rather the self proclaimed God given talent of carving, painting, the work 'Revivalists going to Heaven' carries within its imagery much of the symbolism which today might still be considered controversial.

The visual narrative of the painting is descriptively simple, capturing the essence of its title "Revivalists going to Heaven". Here the numerous anonymous wrapped heads of a revival band are depicted watching the departure of fellow revivalists. The holy spirit is depicted as a birdlike form escorting four revivalists whose feathered wings are not unlike those of this feathered rooster. simultaneously, two leaders (one of whom is Kapo himself ) communicate silently with another, for they fully understand the path that this birdlike spirit will travel. The painting is colourful, a result of the multi-coloured headwraps ranging from red, white, green and blue. These same tones are vividly reflected in the garb of the angels and dimly reflecting in the heavenly skies through which they soar. Landscape is hinted at, but bears no connection to Kapo's character study detailed approach to documentation of the landscape. In mood and theme this painting is more closely related to what might be considered its three companion paintings of the Wirth collection. 'There she go, Satan' 1974, - 'Revivalists' 1969 and 'Be Still' 1970. In terms of sculpture, only one work directly relates to the creation of this painting and that is 'The Royal Rooster' 1967, visually so similar to the birdlike spirit form and three related works. 'Revivalists Goddess, Dina' 1968, The angel ( winged Moon Man ) 1963 and 'The Flame' 1971.

If the imagery of this painting 'Revivalists going to Heaven' is simplistic enough, the appending symbolism and interpretation is not and a complete understanding of this merits a deeper understanding of revivalism generally. 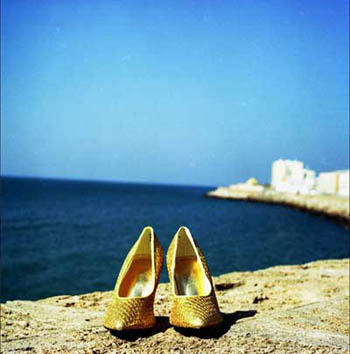