From colonialism to post modernism, Jamaica's art movement has been integrally linked to events and styles elsewhere. So an appraisal of Jamaican art from 1922 to the present provides an understanding of the socio-political history of our own culture as well as that of others. That means it is difficult to speak about Jamaican art without also considering European art and its conventional styles such as impressionism, post impressionism, cubism, expressionism. in addition, we need to also acknowledge  influences from Africa and the wider black diaspora.

As Black-British curator, Eddie Chambers, of Jamaican parentage, noted: "For black people, 'history' refuses to be a lifeless and dull conglomeration of boring dates and events. Instead, it presents itself as earlier episodes of a current existence. We are the latest chapters of our current existence, and as such, we are scarcely able to deny or downgrade its centrality and its importance in our lives. Similarly, 'identity' has an urgency and a relevance which is literally worlds away from the ...individualism which many ... people take it to be.''

Jamaica's art history is a narrative that traverses continents and centuries beginning with the Taino Indians who gave Jamaica its indigenous culture but were almost all wiped out by diseases  during the colonial period. Few artifacts remain as evidence of the Amerindian culture however the National Gallery of Jamaica has salvaged a small collection of domestic items and carved icons (Zemes) that represented their Gods.

From the 17th century, European colonisers recognised the value of islands like Jamaica and within decades established settlements and plantations to provide for the European market goods such as sugar, rum, tobacco and spices. In time, as these areas of production expanded, it became necessary to import labour. Jamaica was peopled by indentured labourers from East India and China and Europe, then later in greater numbers, by Africans supplied through the slave trade. The Portuguese, Spanish, French, and British all vied for economic and political supremacy in the West Indies. But it was the British who eventually maintained colonial rule of Jamaica. With the formalising of this relationship came Crown, Christianity and Colonisation, three C's that ensured that an essentially alien imported peoples would be assimilated into British citizenship as much through psychological, as physical force.

This potted history would suggest that Jamaica, because of all its historical vagaries, might be considered one of the earliest forms of a post-modern plural society, bringing together its melange of Taino Indian, Spanish, French, East Indian, Chinese, African, British, and later Lebanese communities. But the slave trade eventually made Jamaica a predominantly black society. More than 90% of the present day population are of African descent. The remaining percentile are some of the wealthiest and most visible members of the society.  It is they who held power and, historically, it was they who painted.

When Edna Manley, (frequently referred to as the "mother of Jamaican art"), first arrived in Jamaica in 1922, she challenged the local art community when she publically criticised their work as "anaemic" and "imitative". She may have been right, of course, since much of what was exhibited showed a preoccupation with European styled landscape paintings and portraiture using traditional techniques that didn't reflect Jamaica's culture or its people. Black people were rarely depicted other than in a documentary, ethnographic sense. Artists in Jamaica then seemed little concerned with the modern movements in Europe that were already exploiting so called "primitive" cultures for inspiration.

Ironically, Edna Manley was of mixed race and raised in Britain. Returning to Jamaica she joined a movement to change the local artists perception of self and racial identity. Coming from Europe and having attended St Martin's in London, she was no doubt aware of the influence "primitivism" then held over modern art. As a young sculptor she had also begun to include forms in her work that echoed Henry Moore and other modernist tendencies. Whether her call for an appreciation of Jamaica's africanicity came from influences she brought with her, or from the stimulus she felt as part of a new creole community, her efforts to shift the focus of Jamaican art were revolutionary.

The significant cultural change that sculptures like Negro Aroused evoked, however, cannot be credited to the actions of any single individual. Edna Manley's efforts would have been in vain were it not for a prevailing atmosphere of change in black people's perception of themselves. Subsequently, Jamaica's modern art movement has been a collective one, motivated by the creativity of  many Jamaican artists and thinkers reclaiming their history and identities.

Whereas Edna Manley's call for a greater sense of Jamaican nationalism and cultural expression had broadest appeal among the creolised Jamaican middle class, the champion of the peasant, working and immigrant classes that were more rooted in an African tradition, was Marcus Garvey. Starting in 1917, Garvey spear-headed a popular protest movement that captured the imagination of blacks the world over. It was essentially a millenarian movement which professed Pan-Africanism and aimed to repatriate the post-slavery black diaspora back to Africa, primarily through the Black Star Line, a black owned shipping company, and his organization, the Universal Negro Improvement Association. His project attracted many blacks experiencing continued dislocation from urban and industrial shifts in both the Caribbean and North America. His call pushed blacks to mobilise themselves economically and politically as a route to independence.

Despite heavy financial support, Garvey's ambition's to unite the black diaspora floundered because of his mismanagement. His eventual imprisonment in 1925 for 'mail fraud', was a serious blow for his  followers. Nevertheless, his message of pan-African unity was absorbed into the "new negro" intellectual debates of the Harlem Renaissance of the 1920's, and the later ideals of the Black Power and Rastafarian movements.

Ideas of the 'new negro' also fed into the circle which gravitated around Edna Manley during the 1930's and 40's. A small group of liberal ex-patriates started Saturday morning classes, offering artistic tuition to young blacks and encouraging subjects more closely related to Jamaican life. These classes were held at the Institute of Jamaica, a local version of the British Museum. The Institute's authority and eurocentric approach was gradually usurped by these young liberals who nurtured a more localised and dynamic vision. Of course, it helped that Edna Manley was married to Norman Manley, one of Jamaica's most brilliant lawyers. He was politically well connected and who would later become Jamaica's first Prime Minister. Together they held the banner for political and cultural independence and a new spirit of nationalism championed by the brown middle classes.

These early classes were of major importance in the formative years of Jamaican art. There, nearly all the 'pioneers' of Jamaican painting grasped their first introduction to the principles and practice of painting and sculpture. In a workshop-type setting, both tutors and students turned their vision inwards and began to paint their own people and landscapes and genre scenes with newly discovered pride. The negro physiognomy was freshly explored, not as a novelty, as had been the case of portraits executed by visiting artists, but with a sensitivity and perception already witnessed in the early sculptures of Edna Manley. Out of these classes developed a foundation for the Jamaica School of Art and Crafts, founded by Edna Manley, and after her death titled, the Edna Manley School for the Visual Arts. Today this institution offers a full curriculum of art courses to degree level for the English speaking Caribbean.

In its earliest stages, the tendency towards the didactic in order to communicate the nationalist message militated against the Jamaican artsist's wholehearted embrace of pure modernist approaches such as abstraction. During the 1950s and 60s, Jamaican art was predominently representational, strongly figurative and narrative. Impressionist and post-impressionist techniques were more readily employed with a slight inclination towards the type of divisionism employed by the Cubists. With more students exposed to trends abroad, however, it was inevitable that abstraction would be introduced into Jamaican art forms.

During the 1960's, the unity of message in the fledgling art movement began to fray. One could see a split with between artists choosing to remain with more traditional modes of expression and those who moved towards the abstract and conceptual in their work. Yet, even these latter artists were cautious and selective in their interest in modern approaches.

This involvement with western modes of art was, of course, only a middle class preoccupation. The self taught artists had no such interaction. Because they were poor and perhaps less fortunate, it was not even an option. As such, there work might be regarded as distinctly Jamaican and even African in source, while mainstream Jamaican art, stimulated as it has been by Western artistic trends, can find its integrity questioned.

These two strains have fed contemporary Jamaican art. One nurtured an approach to creativity that's now labelled "mainstream." It is characterised by a preoccupation with Jamaican iconography, an emphasis on more formal artistic training and an openness to art historical styles proferred from abroad but reinterpreted to suit the Jamaican context. Like Garveryism, the other strain, labelled "intuitive", maintains stronger links with African forms of expression, is predominantly closed to any external influences and is characterised by the essentially self-taught artist.

As a continuation of issues raised decades earlier artists committed to a philosophy of pan-Africanism used their imagery to re-position the African identity within a Jamaican cosmology. Forerunners in this group were Stanford Watson, Kalfani Ra and Omari Ra. Smithsonian curator Vera Hyatt has labelled the latter two New Imagists referencing the way the body in convulsive forms dominated their canvases. Their imagery reflected an eclectic mix of stylistic and conceptual sources that used theoretical strategies such as deconstruction to critique old world myths related to Columbus, the Haitain Revolution and European literary classics such as Moby Dick.

Post-modern concerns such as feminism, gay rights, homelessness, environmentalism and multiculturalism, form part of an essentially western paradigm and while not negated here, they have taken time to manifest themselves in Jamaican art. While not ignorant of these issues, our artists have shown interest in other concerns more directly related to Jamaica's culture. The widening gap between rich and poor in Jamaica has created tensions and led to violence of which artists are all too aware. Artists such as Ebony G. Patterson, Michael Elliot, Phillip Thomas, Christopher Irons and Peter Rickards are engaging with issues related to violence, homophobia and social dislocation that have been a feature of Jamaica's recent past. Irons, Elliot and Rickards although working in the different mediums of mixed media assemblage, hyper-realist paintings and slaughter-house films, call attention to society's ills through an excruciatingly slow and detailed concentration on the nature of violence itself. Meanwhile, Khepera Hatcheptwa and Lawrence Graham Brown working with similar modes of representation, a crude marrying of found objects, and a heightened sense of colour, keep their attention locked on the under-privileged in society and the way that blackness has long since been a despised condition. Their message is one of uplift, valorising and glamorising the black condition, and referencing past and present achievements of the race. On the other hand, Patterson's work speaks to issues of modern blackness rooted in popular culture that agitate against being defined by one's skin tone. 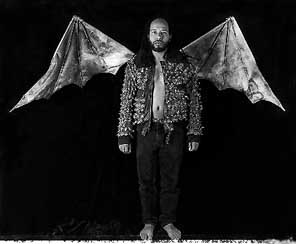