The winning mas band for this year's carnival in Trinidad is Brian MacFarlane's Resurrection. It's his third consecutive win suggesting that he has taken up the mantle successfully from that other genius mas-maker Peter Minshall. This year's sixteen section band as usual distinguished itself from other large bands obsessed with hedonism and tinsel. MacFarlane's approach was to remind us mas costumes before they dwindled to bikinis and bling by reviving devilish characters such as Jab-Jab, Bat, Suck Me Nose Sailor and Mad Cow clothed from head to toe in papier-mache masks and burlap.

Inspired by Melton Prior's eighteenth century engraving, MacFarlane meticulously reproduced many of its ghoulish and comical characters now ritualised in Trinidad's ol mas, hence the title Resurrection that signals a return to tradition. With his fancy clowns and minstrels one could easily draw parallels between MacFarlane and the modern artist Picasso who made a similar return to tradition or rappel a l'ordre in his designs for Jean Cocteau's musical Paradeafter the chaos of the First World War. But, sticking to a handful of earth tones embellished with bronze, copper and gold MacFarlane brings his own imaginative narrative to these players by suggesting that their costumes took their gilt and burnished colours from their rebirth on Tobago's coastal Bucoo Reef. Thus MacFarlane's mas is more deeply rooted in the region and his players such as Soumayree and Red and Black Indians reflect the way that Europe's festival traditions have merged with African, Indian and other celebrations creating creolized characters filled with greater optimism and an exuberance that is uniquely Caribbean. 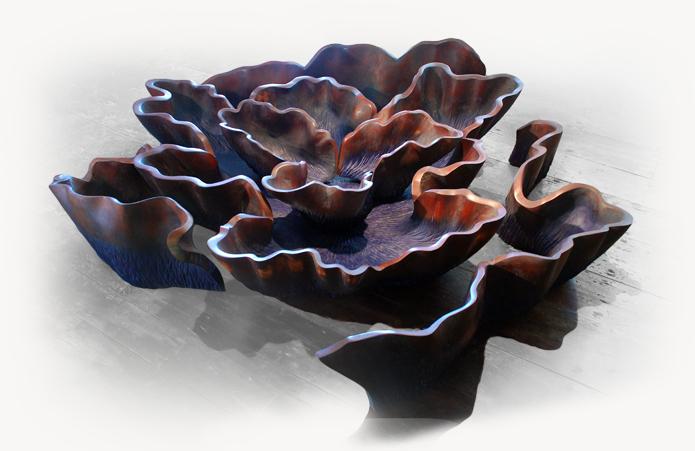