In spite of the cancellation of Kingston on the Edge this year's city urban festival, The National Gallery of Jamaica went ahead with its open house Dialogues in Space, featuring dance, improvisation and fashion performances. The programme began with the work of two dancers Safi Harriot and Zita Nyaradi who blended their creative movements to the live sound of a drum and guitar. The gallery's normally tranquil lobby became a stage for the two artists who dominated the space with their open fluid forms. At times the routine seemed a little clumsy but this might have even been intentional as this awkwardness was absorbed into the push and pull of the choreography. Peter Chin's performance added to this sense of improvisation, he offered a multi-disciplinary performance that referenced 'the dance he might have given' had the urban festival gone ahead all the while stressing that he preferred to play with the uncertainty of the present and the frustration of time. He told us that he wanted to give us everything and tell us everything about what had brought him to that moment even as he interacted with the audience asking them repeatedly 'how much time do I have left?' His fifteen minutes of hesitation, humour, sound poetry, recitation and dance kept the audience guessing as he explored concepts related to embarrassment and transcendence and even departure. In contrast, fibre artist Jehan Jackson's fashion display was minimal. Her five models placed on pedestals held their poses like mannequins shifting only occasionally to display a new attitude and aspect of their garb. Titillated, the audience moved closer, themselves becoming part of the optimistic mood and art on show proving that improvisation trumps poor planning and pessimism, any day. 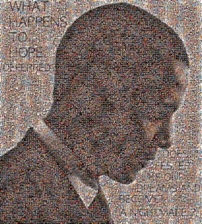