Contemporary Jamaican Art: A Jamaican Presence in the About Change Exhibition curated by Felix Angel, essay Petrine Archer, May 18, 2011

What we call Jamaican Art today is a phenomenon of the 20th century. The genre dates to the earliest days of a fledgling nationalist movement that exhorted the island's artists to take inspiration from local subjects. In the advent of independence from British colonialism and with the creation of works such as Edna Manley's Beadseller (1922) modeled from a local market vendor, we can speak of an art form rooted in the experiences of people who identified with the island as home. Because of this, we can also recognise Jamaican art as being 'already modern'. It was fashioned when avant-garde artists in other cities such as Paris, New York and London, disenchanted by the spoils of imperialism and inspired by the art of other cultures, posited new ways of seeing. Similarly, works such as Ronald Moody's Johanaan, 1936 or John Dunkley's Banana Plantation (1936) and David Miller Jnr's horned heads from the 1950s, represented a nation undergoing change and reflected new visual models with modern culturally distinct aspirations. Framing contemporary Jamaican art within this context of modernity allows us to view works such as Michael Parchment's A New Beginning (2009), and the Jamaican artist's identity not as native or primitivised, but rather as radicalized and instrumental in a process that would critique and support the dismantling of European colonialism in the second half of the 20th century.

Yet, one of the most pronounced discussions to have emerged since the new millennium, both in Jamaica and elsewhere, is whether it is still appropriate to discuss art in nationalistic terms. Whereas an earlier generation of artists such as Hope Brooks, Cecil Cooper, Kofi Kayiga, Bryan McFarlane and Milton George typically represented Jamaica in international exhibitions and ubiquitous biennials during the 1990s, today contemporary affiliations and our artistic identities are shifting. As Curator and now Executive Director of the National Gallery of Jamaica Veerle Poupeye has noted:

“Nationalist assertions of a single, unproblematic Jamaican identity were relevant and necessary in their own time but are increasingly out of touch with contemporary realities and debates ... Contemporary art also often falls short on that issue and fails to address the complexities of contemporary identity questions.”1

As global communities exchange and overlap with each other, we can question whether visual categories that reference an exclusive stylistic national tradition are still valid, and we can ask to what extent it is appropriate to speak of a Jamaican art form that is pure and unaffected by other cultures? Even our earliest history born out of a clash of cultures cautions us to avoid such nomenclature.

Jamaica's history is rooted in a colonial experiment involving piracy, maroonage, slavery, indentured labour and global trade. It produced a rootless and polyglot population that even in this island outpost bore many of the characteristics of an industrialised modern existence. To understand Jamaican art and all its contemporary manifestations, and especially the challenging disparate works of the artists selected for this exhibition, it is useful to first explore that historical background and the island's multiple cultural influences.2

With this context, we understand how slavery has become a preoccupation of many contemporary Jamaican artists especially since the bicentenial anniversary of the abolition of slavery in 2007 and the exhibition Materialising Slavery: Art, Artefact, Memory and Identity mounted at the National Gallery of Jamaica and Institute of Jamaica that same year. Typical of this imagery are imagined forms such as Laura Facey's Their Spirits Gone Before Them (2006) a canoe like vessel filled with minature slave figures that reference her earlier monument Redemption Song even as it bears formal resemblance to Margaret Chen's earlier Cross Section of Ark (1999) both of which are in this exhibition. Similarly, Christopher Clare's multi-panelled painting referencing the slave ship Brookes and David Boxer's overwhelming installation crammed with cut and spliced documents and imagery related to slavery are both indictments on the era. We see echos of this type of imagery also in Nicholas Morris's Back Tally (1995) and Charles Campbell's mandala-like works on paper, that so poetically and beautifully register the pains of that system. Collectively, the overiding beauty of all these works raises the question of whether Jamaican artists have come to terms with slavery's history, when they can begin to render it in such poignant and exquisite ways.

But in the past decade events 'on the ground' in Jamaica have made a number of our contemporary artists more abruptly aware of the present. The art of this new millennium appears to be shifting in focus and style again in ways that reflect their acute sense of social issues and activism. Artists such as Ebony G. Patterson, Michael Elliot, Gerard Hanson, and Peter Rickards are engaging with concerns such as violence, homophobia and social dislocation that have been a feature of Jamaica's recent past. This generation of artists compete with the more glaring aspects of Jamaica's popular culture related to dance hall, ghetto fabulous fashions, and the aesthetics of bling funerals for a stake in the nation's visual memory.7 They are taking their art to the streets to meet that culture on its own terms with a visual language that now has the privilege of an art historical past, even as it moves forward.

For the full text of this essay see:  Inter-American Development Bank (exh.cat.) , Contemporary Jamaican Artists - A Jamaican Presence in the About Change Exhibition,  May 18 - July 22, 2011. 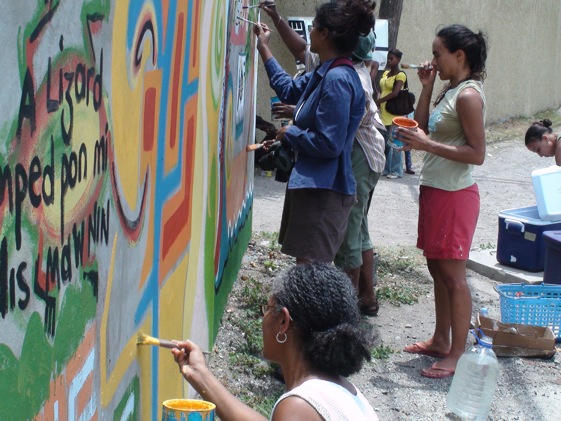