Negrophilia: On Exoticism, Haile Selassie and Crash [the movie]

At the moment I am mulling over the success of the Hollywood movie Crash, recently awarded the Oscar for best film of 2006 starring among others, Sandra Bullock, Don Cheadle, Matt Dillon, Terence Howard and his on-screen partner Jennifer Esposito as well as the popular rap star Ludacris. The film’s plot centers around several characters of different racial backgrounds that collide in one incident. The different stereotypes society has created for those backgrounds affect their judgment, beliefs and actions. This in turn causes problems for each of them. The film’s happy ending with the stylish brown-skinned wife’s rescue from the burning flames of a car crash by the white police hero Matt Dillon combined with its subsequent box office success and Oscar award, seems all too pat and coincidental, especially in the light of 9/11 and a year that we all witnessed Hurricane Katrina and the rabid racism its wind storms unleashed.

With this in mind, perhaps we can explore our contemporary responses to racism and to question whether there is an exotic aesthetic somewhere between black and white that is mediating it. By examining how photography facilitated exoticism; its rituals of fancy dress; its heightening of racial and gender differences; its ability to create and capture the subaltern and the transgressive, I want to suggest that the exotic ‘other’ of photography has become an engaging concept for both blacks and whites, one that is producing a kind of global aesthetic and the modern media’s panacea for racial intolerance.

But what is the exoticism? In the fine arts, the notion of exoticism carries with it a certain allure, it references the unfamiliar and exciting in a way that is decorative, edgy but ultimately non-threatening. It is a representation of otherness that suggests compromise. In portraiture, neither black nor white, it represents racial ambiguity that we might consider in shades of grey or in superficial skin terms as ‘browning’. ‘high coloured’ or ‘yalla’. Like Baudelaire’s ‘Venus Noire’ based on his romance with his Haitian mixed race mistress Jeanne Duval, exoticism carries with it a sense of racial ambivalence, sexual excitement but also displacement. Art history has always reserved a special place for its exotics, they reside in sites of colonial fantasy such as the orient and the harem. Their hybridity allows them access to the spaces in between, places of the imagination and desire. Exoticism is primitivism gone soft, an abandonment of crude transgressive forms to accommodate something more honed, or even refined. If primitivism is black, then exoticism is honey coloured, if primitivism is forbidden then exoticism is tolerated. 1It is Matisse compared to Picasso, 2Modigliani as opposed to Giacommeti, or in contemporary popular culture’s terms, it is Beyonce versus Blige.

As a seductive form of primitivism, exoticism still bears all the characteristics of stereotyping that fix it’s patterns of entertaining and colourful repetition to a decorative place of limbo; 1a place that we see so richly represented in tropical paintings of Le Douannier Rousseau’s or the Mediterranean scenes of Henri Matisse. As an Ethiopian, Haile Selassie enjoyed a certain status in the West’s hierarchy of pseudo-racial thought. In terms of physiognomy, because of their refined facial features, brown toned skin and aquiline noses, Ethiopians were classified differently from sub-Saharan Africans. A case was made for them being Semites. In addition, their prominence in the bible, linked to Moses, then to the lost ark of the covenant fabled to have been secreted in Axum gave their history unrivalled mystique. Tales of King Solomon and his love for the Queen of Sheba combined with stories of various travelers and expeditioners such as Prestor John, distinguished Selassie and his culture from the rest of Africa.

Most blacks were ignorant of these western narratives they venerated Selassie for other reasons. For them he represented a Messiah prophesied by Marcus Garvey, the first black king of a modern nation and a connection to the past that was mythical, grand and equal to that of white history. One of Selassie’s most favoured pictures is that of him as a young prince. Already his sense of refinement and regal bearing is apparent and the diffusion of the camera softens his features in a way that allows him to appear non gendered and angelic. When black people saw Selassie’s picture, they saw an image of Christ as a refined black man, with the same aquiline features, the same bearded face, and the same lineage, but only black. Selassie represented a fulfillment of their deepest hopes, a return to Zion.

Images of the Haile Selassie were profuse in the 1930s, especially after this young King representing one of the oldest civilizations of the world defiantly stood his ground in the face of Mussolini’s Italian invasion. In 1935, the world held its breath as this little man, the head of a poor black nation declared to the League of Nations that he would not capitulate to a fascist invasion and that he would fight the Italians to maintain his sovereignty. Both at home in Ethiopia and internationally in the pan-African community, Selassie’s feistiness earned him support, especially from many young black men who vowed that they would not cut their hair until Ethiopia was liberated. Selassie’s eventual victory seemed like the fulfillment of prophesy for blacks the world over and especially for those of the diaspora who saw for the first time that a black man could stand up to an imperial power and win. His success also sealed Garvey’s popularity and spawned Rastafari, a Jamaican based spiritual movement named after Selassie that would venerate and declare him as their God and champion a global theocracy ruled by him. At the core of their credo was a belief in racial equality for which they were prepared to fight. In its advent, Rastafari’s knotted root-like locks- a symbol of their racial defiance - were feared, hence the term “dreadlocks”. Fashioned from the same East African Muhumusa revolutionaries, Rastafarian dreadlocks were intended to strike fear in the hearts of those who viewed them. Like their East African and Ethiopian predecessors, their hair was a sign to Babylon that the end was near and that judgment and the return of Selassie their Messiah, was imminent. Jamaican Rastafaris cultivated their primitivism in order to heighten the white man’s fear. Like Duchamp from another era, they played into their exotic otherness to raise bourgeois anxieties.4 They took as their anthem, Selassie’s speech to the UN, later popularized by the singer Bob Marley that began “Until the philosophy that holds one race superior and another inferior, is finally and permanently discredited. There will be War...”. On their uniforms of khaki they pinned badges bearing the photographed images of His Imperial Majesty, as if the capturing of his image would somehow give him longevity, immortality.

MatisyahuToday, some thirty years after the death of Haile Selassie, Rastafari has become appealing and even innocuous. This is Matisyahu, he’s a Jewish high school drop out whose latest album is currently climbing the charts because of his fusion of reggae and hip hop lyrics with a passionate commitment to Judaism. Matisyasu can now join the likes of Sinead O’Conner, Kate Bush, and Robbie Williams who since 2005, have all released reggae albums and romanced black culture on their way to stardom. Matisyahu sees no problem with his adoption of rastafari’s music to communicate his spirituality in fact he claims that it was Rasta’s message about being God’s chosen people that originally attracted him to their music.

So what could it be about the experience of the other that could bring this sephardic Jew to an understanding of the orthodoxy of his childhood? Is the other becoming the same, and the same becoming the other? Is culture and it’s exoticism the new meeting ground where we can play out our longing for each other? In an ironic twist of roles Rastafari’s rage has become fashionable, adopted by a rootless culture, both black and white, anxious to identify with something outside of themselves. Yet, the irony is that Rastafari’s drum beating once a lament for slavery, a call to action against colonialism, and the possibility of redemption has been usurped by ska, rock steady, roots, reggae and rap. Red, green and gold is worn like Nancy Cunard’s leopard skin; post-modern signifiers for cheerleaders of liberalism rather than liberation. Which brings me back to the movie ‘Crash’ this year’s Oscar success that turns out to be little more than a Hollywood ‘feel good’ film. Despite its in your face antagonisms, its seedy sub-plots, its blatant racial tension and its up-front privileging of the social, sexual and psychic violence that exists between black and white. In the end, it is its aesthetic of exoticism that prevails. The coffee-coloured wife is rescued by the white prince/policemen, and through this act of bravery he finds attrition and forgiveness. She returns to her coffee-coloured husband, who has retrieved his manhood by becoming a model of tolerance for his black niggers from the hood, meanwhile the white politician’s wife finds comfort in the arms of her black maid. Such scenes soothe mainstream audiences hungry for happy endings to a year that witnessed Katrina’s floods, devastation and floating bloated bodies. And, for those of you who might find the film’s dose of racial reality difficult to digest, then its producers provide a website so that we can participate in the issues and feelings raised by the film. Here, we can select from a range of emotions such as anger, rage, respect, tolerance, and visualize our racial uncertainties in colour and form. Each visitor to the site is allowed three feelings; that is, three colours and three shapes that signify emotions about race. The result can be either a jarring composition of harsh hot tones or a more muted visual essay of tolerance and forgiveness. The important thing is that having explored the violence of race, Hollywood offers us these exotic and colourful compositions as a form of closure for our feelings. But this article’s images remain in black and white as testimony to a reality as yet unresolved, challenging us to look beyond Zion’s rainbow, Africa’s violets and Hollywood’s brownings and really see the children of Ethiopia, Sudan, Rwanda, Zimbabwe and even America…and all the time the Lion of Judah roars but makes no sound…just like a silent movie… 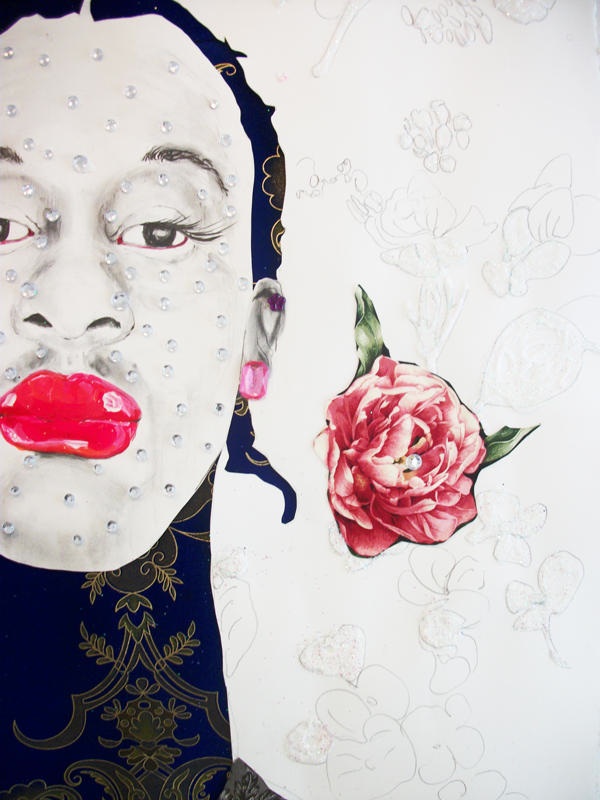